The MESA system provides a standard, non-proprietary and scalable approach to energy storage. The PUD’s energy storage program, which forges partnerships with major U.S. and international business partners, will include two large-scale lithium ion batteries, one built by Mitsubishi and GS Yuasa and a second by LG Chem. Both lithium ion batteries will utilize a Parker Hannifin Power Conversion System.  Later this year, the PUD will deploy multiple advanced vanadium flow batteries at a second PUD substation, which will be built by UniEnergy Technologies, based in Mukilteo, Wash.

The collaboration will produce state-of-the-art solutions, bringing together major equipment and software companies to establish the appropriate industry standards and interfaces. The open standards approach is much different than other energy storage projects in the past and is expected to result in the expanded application of plug-and-play type energy storage systems to help solve the expanding needs of today’s electric grid, which depends more on intermittent resources such as wind and solar. 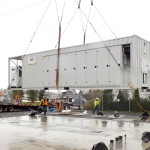 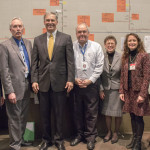 Gov. Inslee at the dedication of MESA project.